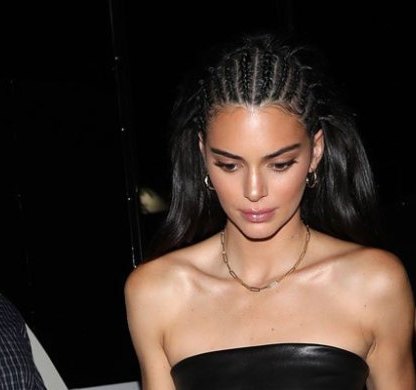 As far as I can remember, conversations about the appropriateness of specific Black hairstyles were typically centered around the workplace and whether or not someone would appear unprofessional (especially in a corporate setting) wearing braids, locs and the like. Consequences for hair choices disproportionately affected African Americans, but there was also an understanding that if a person of any race (however, unlikely) punched in wearing an ‘unapproved’ style, they too would have reprimands thrown their way. Today, the conversation has shifted; and while the concept that Black people are punished for styles linked to their culture and history remains, the new facet is that White people donning the same looks are heralded and because this dichotomy exists, it is cultural appropriation for a non-black person (especially white) to wear braids or similar ‘do’s.

It used to be that the fight to expand images of professionalism (to include elements of black culture) was handled in court; now, we just scroll through the comments. A thoughtful article from 2001 discussed the issue as improving, as more employers were willing to take a more even-handed approach. It never once mentioned that a viable solution would be to restrict others from making similar hair choices because that…solves… nothing.

In 2018, someone decided that African people invented braids (not true) and that a decision by a non-black person to wear said hairstyle requires self-reflection (am I doing this to be trendy? Or because I want to inspire?) and research (!): “Don’t [wear braids] for fun or because your African-American boyfriend or girlfriend has them…Learn about the story, find inspiration and give credit where credit’s due by explaining who or what has inspired you, like on social media.” 🙄 Advice like this leads to stuff like this: 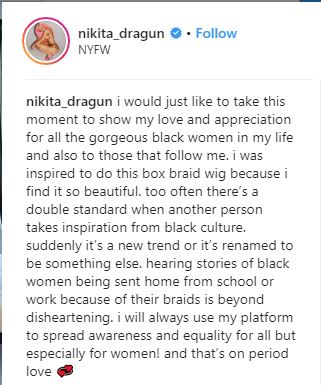 A ‘cut and paste’ tagged to the original post to ward off criticism. This is considered sufficient penance paid for the privilege of wearing a hairdo not associated with one’s race or ethnicity? There’s so much focus nowadays on ‘credit’, precious little on how this moves the needle forward. It’s insulting to think that praise and acknowledgement are satisfactory substitutes for institutional and cultural change. People clamoring to be mentioned in the footnotes of someone’s IG feed don’t get to lead the conversation on how to problem solve issues that are deep rooted in this country’s unresolved racist past. Nah..they should stick to criticizing folks’ hair choices on social media.