Did you hear the story about a little boy named Teddy who threw a pizza party for over two dozen of his closest friends…and no one showed up? Of course you heard about it, it went viral a few weeks back.

There have been a few stories in the past couple of years of planned celebrations going bust, with few or no attendees save for parents and family members. We’d eventually hear about it because an angry tweet spread like wildfire or a heartbreaking blog post got shared ten of thousands of times, but what’s vexing about Teddy’s situation is that it didn’t reach the masses because of personal storytelling, but because his mother, sent a picture of her son sitting alone at table, to a local reporter. 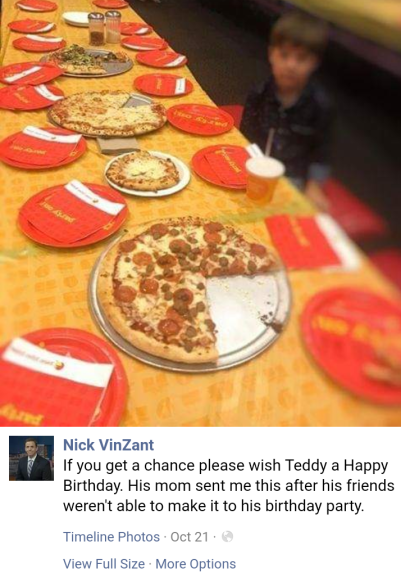 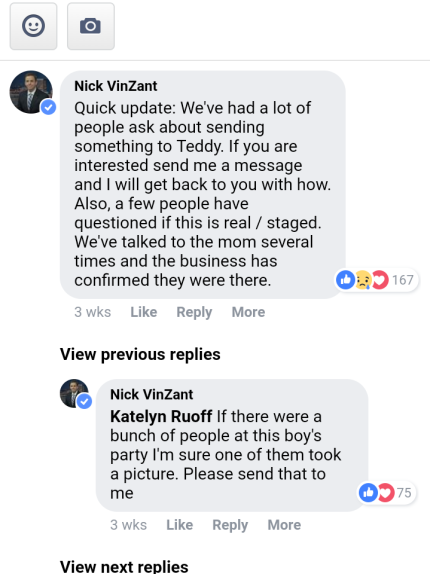 The reporter was professional enough to blur out the child’s face, many other news outlets did not do the same (I presume with parental permission), so when I originally saw the picture, the kid’s face was in full view and I was stunned that his parents would put him on display like that. Why would anyone share such a deflating moment in such a public way? And then I read about the free tickets to sporting events and gifts being offered and well-wishes coming in from people worldwide and I thought…I got my answer.

The other stories of children snubbed on their special days was revealed through personal retellings and magnified in a very organic way; the stories, for whatever reason, touched people and caught on. This story, by virtue of it being shared with a member of the media, reeks of opportunism. And as you can see from the images of the posts above, the truthfulness of the situation was questioned enough that the reporter who originally posted the image had to comment on it, confirming that the family was indeed there, (which is a sleight of hand answer since the picture proves that) but not whether or not there was a party.

The rise in stories about no-show birthday parties also had me wondering, why? Turns out it this might be the effect of ‘all or nothing’ birthday party policies instituted at schools to prevent hurt feelings among young students, but rather than easing exclusionary behavior, the policy proved that hurt feelings are something you simply can’t avoid.

This journal is my exploration of all things: social, political, faith based, artistic, popular and of course, uselessly random. View all posts by k allisse